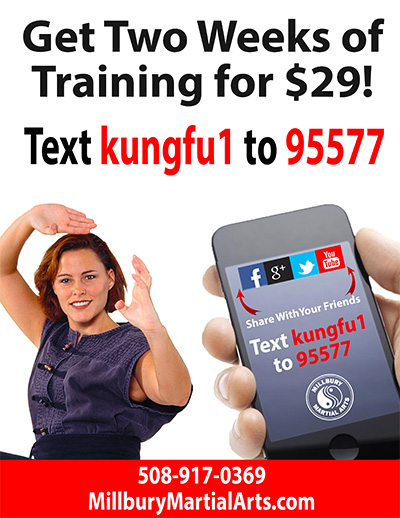 Have you ever had a white belt class so packed that you were limited to knees and elbows because extended techniques would hit other students? I have.

I recall counting 52 white belts in my adult class on a Tuesday night. Easily 40% were referrals. How did I get so many friends and family of current students in the school? Easy.

When a new student enrolled, I handed him or her a 30-day pass to give to a friend. It worked like a charm. Students are excited when they join and tell their friends.

This way, they had something to share with their friends and family as well. One student often became two students.

Today, the average person on Facebook has 200 friends on their account. Wouldn’t it be great if you could get in front of those 200 friends and family? Now you can.

When new students enroll into your trial program, have them text your KEYWORD to 95577. In less than 30-seconds this will blast your offer to all of their friends and family on social media.

Your new members instantly broadcast that they are trying your studio.

When that student enrolls into your regular program, have them blast it out again.

All their friends and family have to do is to show the pass on their phone when they come into your school and they are good to go.