I began teaching professionally in 1974 and for the next 30-years, like every other martial arts instructor, I advertised and believed I was teaching self-defense. That changed when, in 2006, I was watching my kids in a karate class at Chris Sutton’s school.

Though his assistants usually ran the class, one day Chris stepped in and taught a ten-minute anti-abduction segment. My jaw hit the floor. I turned to my wife and said, “I could not have taught 1-minute of that. That’s the best self-defense I’ve ever seen.” It still is. She was equally impressed. She enrolled in the COBRA-Defense Academy and is now an instructor with over 100 hours of training.

Chris modeled the COBRA-Defense system after his training in multiple police academies and training as a street cop, sheriff, and maximum security prison guard.

Your self-defense program needs to be based on a real field training designed to protect against violent criminals on a daily basis. There is a massive gap between self-defense and what is taught in martial arts schools.

Eight Signs That You Need to Reevaluate What You Teach and Call Self-Defense:

Find out about COBRA at SelfDefenseBusiness.com 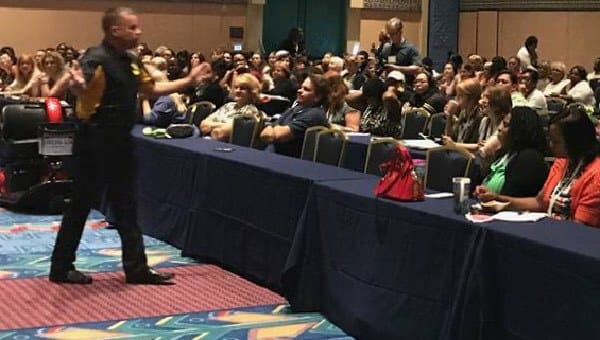 We’d like you to train our 4,200 employees. How much will that cost?

How would you respond to that inquiry? Chris Sutton of COBRA-Defense responded with a proposal and got a signed contract from a Fortune 100 company yesterday. I don’t know the figures, but you can imagine that it’s probably a bit more than starting a new Little Dragons class.

How does COBRA get these kinds of deals? Because COBRA is in the BUSINESS of self-defense.

Imagine that you are the HR person for a major corporation looking for active shooter and workplace violence training. Do a search for self-defense. Here is what you will probably find.

If you would like for self-defense to be a revenue generator rather than a theoretical benefit, COBRA is the way to go. MATA members get a $400 discount on the license. Find out more here.