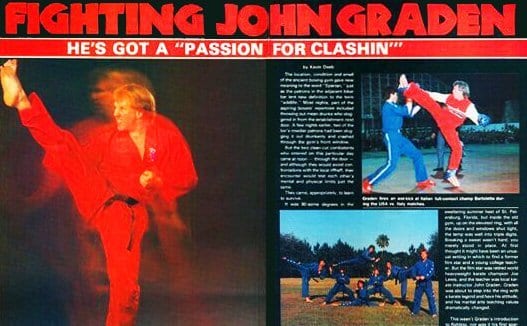 How to Teach Sparring So Students Don’t Quit

The fighting was hard contact and as intense as you can imagine it could be climbing into a 12-foot-square ring with the man cited as “the greatest fighter in the history of karate.”

Joe taught me that fighting should be as real as possible. He also confirmed my opinion that point karate had little value in instilling the tenacity or attitudinal conditioning necessary to go three rounds with anybody. Which he said should be a minimum standard for a professional black belt.

My motivation has always been as a teacher, not a fighter or champion.

I’ve never had a compelling drive to be a world champion or trophy collector. I’ve always competed for education and experience.

Whenever I’m in a learning environment, such as working with a great teacher or taking a personal development seminar, I am always asking myself, “How can I teach this to my students?”

In the case of fighting with Joe Lewis, the question changed to, “How do I teach this to my students without driving them out the door or to the hospital?”

In most schools, sparring is one of the leading causes of dropout among students.

Even when the school sticks to the relative stop-and-go safety of point karate, students still drop out.

How, then, could I motivate these students to engage in sparring without hurting them or scaring them off?

I learned that the key is in the perspective you keep in working with your students.

If your goal is to get your students to black belt, then you have three to five years to accomplish that. This is also when I ceased teaching all traditional skills. Class was devoted to exercise and learning kickboxing and self-defense. We didn’t want to spend the first half of class telling students to pull their hand to their hip when that is clearly not going to help them spar.

How to Introduce Students to Sparring

In the sparring program I developed, white and gold belts are required to learn simple block and counters while wearing pads on their hands and feet.

These techniques are executed against jab, cross, hook, uppercut, and body kicks — but with little or no contact.

The goal is just to start conditioning the students to get used to punches and kicks coming at them and responding to them.

Limited sparring drills are a great way to help students get comfortable and build skills while sparring.

A limited sparring drill is a sparring match with a strategy other than winning as the goal.

For instance, one student might be limited to executing only a jab to the forehead. For these drills, we always target the forehead instead of the face, as a safety measure.

The student’s partner could then be limited to using only position movement (footwork) and/or head movement as a defense. No blocking in this drill.

In the following round, we may have the defensive fighter add hand traps to his defensive choices.

For round three, we may slow things down slightly and place the defensive fighter with his back against a wall to prevent him from running from his opponent.

There is No Rush

Understand that this represents the first two to six months of their training. Often, instructors have their students sparring within the first three months. Our students barely make contact for six months.

When the students graduate into the green and blue belt class, they begin to actually spar following the rules of light-contact kickboxing.

However, there is still no head contact, but body contact is permitted. The students wear headgear, hand-and-foot protective pads, shin pads, a mouthpiece, rib guards, and a groin cup for the guys.

Through this structure, we’re by trying to avoid students feeling as though they have to figure out what to do on their own like most schools.

At the same time, they are actively, enjoyably and safely engaged in a sparring-like exercise.

The end result is, the defensive fighter gains confidence in avoiding contact.  That is a great feeling.

Prepare Students to Get Hit

Teach them exactly how to inform their partner if the contact is too hard.

Respect and courtesy are key attitudes. Make sure that the person being requested to lighten up is taught that “Yes ma’am or “Yes sir” is the only acceptable response.

Only the person getting hit can determine if it’s too hard and he or she cannot be questioned.

After an additional eight months in that class, the students graduate into the blue and red belt level.

At this point, they are allowed to make light head contact in addition to moderate body contact to the rib-guard area. Students are taught to strike the headgear and not the face.

Students must be mentally conditioned and have their confidence and tenacity built to prepare them for actual sparring, which is part of the Phase One Training explained in Chapter 2 in the Pedagogy section of the Certification Manual.

At that point, mentally they are ready to face the challenges sparring will present.

But now, after a year of training, they’re ready to meet it head-on with excitement and anticipation instead of anxiety and trepidation.

Eight months later, they graduate into the brown and black belt class, where the intensity and contact level is somewhat more “realistic.”

But after close to two years of training and preparation, these students are ready for the challenge mentally and physically.

Take good care of your students and nurture them along to ensure they are going to be part of your school and part of our martial arts family for a very long time.

When they enroll, they are investing a lot of trust in your leadership and guidance.

Few areas of the martial arts can be as confusing or intimidating as sparring.

Keep a long-term black belt-oriented perspective on training your students and you will have a much better chance of having them stick around to successfully achieve that goal — and more.