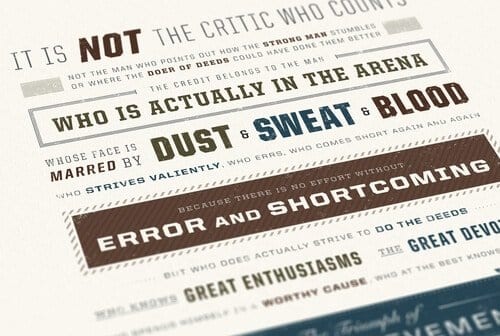 The Man in the Arena

If your school falls behind on rent, are you or your employees liable?

If you use your school or your personal credit to raise funds to open or sustain your school, are you or your employees liable?

If your school is sued for $2-million because a mirror fell off the wall onto a child, are you or your employees liable?

In all three cases, it’s your financial fortune on the line, not your employees.

At a time when hard working, successful small business owners are being portrayed as evil and greedy, I want you to understand the concept of Risk/Reward Ratio on a deep level.

Anyone who takes the risk of signing a lease, hiring employees, and put themselves in the crosshairs of lawsuits is taking far more risk than someone who just collects a paycheck.

I am writing this because we are at a time in history where many have forgotten the American concept of “Rugged Individualism.”

People want higher wages and more benefits yet no one is looking out for the business owner who is taking the true risk.

An All Too True Example

I can tell you about this first hand. I created NAPMA in 1993 in the spare bedroom of my house. I also had two schools running at the same time. They were all my risk.

I created the concept and the content for NAPMA myself. I hired a top level and expensive art director to give everything we produced a more professional look than anything before it.

My magazine, Martial Arts Professional, was the first martial arts magazine printed in full color. Who was on the hook for $26,000 a month for production, printing, and mailing? Me. Not the writers or editors that I showcased in the magazine. Just me.

To launch NAPMA, I personally paid to have 1,000 sample membership boxes mailed across the country to give school owners a clear example of what I was offering.

1. A video with three professionally shot and edited seminars.

This trial venture cost me nearly $10,000 to produce, print, pack, and mail. No one else paid for this. If it failed, it was my money lost. It was my risk.

Fortunately, the mailing was a success and calls started pouring in from schools to join at $99 per month.  125 members enrolled in the first month.

As an S-corporation, I was the first employee of NAPMA. Sarah Everingham was the second and Rob Colasanti was the third.

Rob and Sarah handled the heavy volume of incoming calls while I created content and networked. Most calls were asking to join. It was order taking, not selling. Who paid to make the phone ring? Rob? Sarah?

When we eventually moved into offices and the company grew to 25 employees with millions a year in revenue, whose risk increased? Sarah? Rob? Other employees? Not even close. It was my risk.

That was made abundantly clear when a friend in the business contacted me seeking employment. He was in a bad situation after his hip replacement and came to me looking for a job with NAPMA. He was willing to relocate with his family from out west.

When I gave him a six-figure annual contract, I was glad I was in a position to help him. He was a friend and experienced school owner consultant.

I thought it would be a win/win. I was wrong/wrong.

In less than a year, he sued NAPMA to get out of the contract.  Whose name was on that lawsuit? Rob’s? Nope. Just mine and the company name.

Another other employee I hired at the time was Charles Ferrer. Charles was former president of Everlast and MACHO.

Since Rob has never owned a school or any business for that matter, I thought Charles had the experience to run NAPMA with me.

After about a year, Charles designed a flyer that played a big part in the lawsuits that Century filed against NAPMA and myself. I don’t think he was trying to hurt me or NAPMA.

But, was his name or Rob’s name on any of the lawsuits? Nope. Just mine and the company name.

I was served so often for these lawsuits that to this day, I despise the sound of a knock at the door.

The expense of three years of court battles and a two week federal trial in Oklahoma with attorneys costing $300 an hour and up were astronomical.

Did Rob, Charles or any employee offer to help pay? No. It wasn’t their risk. It was mine. I was the owner. I had to crash my kid’s college funds, my IRAs and sell virtually everything.

Did any of my employees have to sell anything to pay for these bills? Of course not. It wasn’t their risk.  It was my risk and that entitled me to the rewards.

At the time, I had a home on four-acres, a Mercedes and a Viper, all paid in full with a $6,000 a week salary plus bonuses. I was generous to my employees as well. Three of my employees earned six-figure salaries, Tom Callos, Charles Ferrer, and Rob Colasanti.

When Century drove NAPMA into bankruptcy, who lost out? Callos quickly sued to get out of his contract and Ferrer left. Colasanti stayed on at a reduced salary under Century.

For the most part, the media, which is comprised of pools of employees, gives the anti-business crowd plenty of airtime which fuels the flames.

What they fail to point out is that the owners of small businesses take HUGE risks to open and run those businesses.

Any politician who wants to raise taxes and expand regulations is trying to INCREASE that risk to you.

It’s nauseating to see former employees take 100% of the credit for your success, or steal your students, when you were the one footing the bill and they were simply following your instructions.

In the pre-NAPMA days, I was on tour promoting my book, Black Belt Management. While I was gone, my top instructor opened down the street and took as many students as he could. I invested money to get the students. He took them.

If an employee like Rob did an interview of a famous person for the NAPMA program, it was because NAPMA paid for the plane flight, hotel, equipment, meals, and took the risk of it somehow backfiring and turning into a legal nightmare. Without the NAPMA’s name, the interview would never have happened.

If someone claims to be an expert martial arts school / small business expert because they worked at NAPMA, just ask them if they have ever even owned a school or any business.

Or, is all of this “expertise” the second hand knowledge from people who were actually taking the risk and fighting in the arena? Is he like Tiger Woods former caddie taking credit for just handing Adam Scott his clubs?

Employees have never laid in bed at 3 am worrying about:

Our country was created so that you could have the opportunity to follow your dreams. That freedom is being attacked by people who resent success. Usually, from their parent’s basement.

It’s also being exploited by those who have never had their nose bloodied in the ring of day-to-day business but instead claim their employers risks as their own.

As Theodore Roosevelt describes, it’s the cowardly way of “those cold and timid souls who neither know victory nor defeat.”

“Citizenship In A Republic”

The credit belongs to the man who is actually in the arena, whose face is marred by dust and sweat and blood; who strives valiantly; who errs, who comes short again and again, because there is no effort without error and shortcoming; but who does actually strive to do the deeds; who knows great enthusiasms, the great devotions; who spends himself in a worthy cause; who at the best knows in the end the triumph of high achievement, and who at the worst, if he fails, at least fails while daring greatly, so that his place shall never be with those cold and timid souls who neither know victory nor defeat.