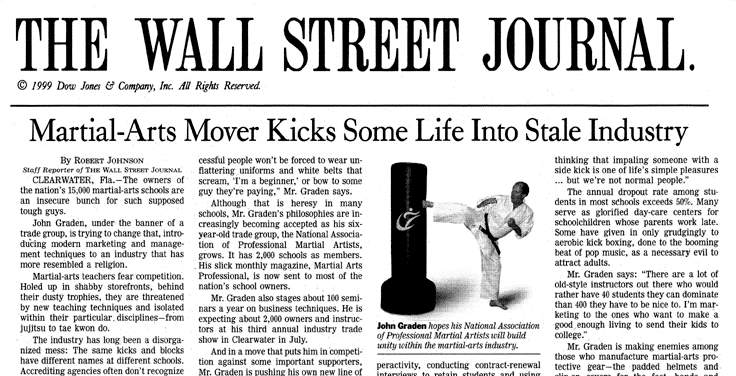 How to Get Media Coverage for Your Martial Arts School

This is an excerpt from my new edition of The Art of Marketing without Marketing.

Nothing is more powerful than the media for elevating your business above your competitors. I’ve been working and pitching the media for decades. I’ve had my own TV show, published a national magazine, and have been featured in many major media outlets including, publications, TV, and radio.

In my experience, here is how to get media coverage.

Understand that the media get pitched all day long. Everyone wants the “free publicity” that the media offers so you have to stand out from the crowd. There are two ways you can do that:

Why is Your Event is Newsworthy?

Before writing the press release, brainstorm with your team or both sides of your brain to come up with three reasons that your event is newsworthy. These are called angles.

How to Make Their Job Easy

The news-media work on tight deadlines. They do not have the time or interest and hand-holding you through the process, so let me do it here for you.

Speak to the Medium

Before pitching a TV station, think about what they need. TV is visual, so paint a picture for the producer that helps him visualize the action.

Years ago, I was called by the local CBS station to be guest on a live noon show for a segment discussing a young American man who was caught with marijuana and sentenced to six lashes with a cane. As a martial arts expert, they want my comments on what that experience might be.

As I was driving to the studio, I kept thinking of how I can make this interesting. While sitting at a red light, I noticed a fruit market with a table of watermelons. I quickly pulled in and bought two of the biggest, ripe watermelons and stuck them in my car next to a bamboo cane that I had grabbed from my karate school. Doesn’t everyone have one?

Why did I buy two watermelons? In order to do what I wanted to do, I had to convince the floor director that it was going to work.

When I walked onto the set with two watermelons, he immediately demanded what I had in mind. I was fine, because I expected this exact reaction. Floor directors are under a lot of stress and some can be quite nasty.

I invited him to follow me outside where I set a watermelon down. I said, “I think this will illustrate what this kid is about to experience.” Then, with all the fake, pre-strike Bruce Lee facial expressions I could muster,  I raised the cane high and ripped it through the air and split the watermelon almost in half. Almost was even better because the melon laid their like it was bleeding guts out on the ground. His jaw dropped and he said, “That is f****** cool as s***. I was a hero in his eyes and a regular on the show after that.

That would not have worked on radio so think ahead of how you can maximize your value to show and its medium.

Watch Out For Egos Bigger than Yours!

While most show hosts are easy to get along with, the production crew around them may not be as nice.

The reason I brought two watermelons was because I knew, from experience, that floor directors can be egotistical jerks. One melon was to calm the guy down and the second for the live show.

A floor director is in charge of the visuals. Being a karate guy, my appearances almost always include a demo. This requires finding out where the light ends so that your kata or demonstration can stay within it.

In time, I learned to let the floor director take the lead by asking him, “Where do you want us to stay so this looks good?” This made him the boss, and everything fine.

Build Their Confidence in You

This is more for radio and TV guest appearances, but it always applies when working with the media.

The reason that you often see the same guest commentators on TV and radio is simple. They have proven that they can be depended on for interesting observations or explanations. They are good guests who add value to the show.

The media business is cutthroat. If a producer can get fired for greenlighting a guest who bombs. So, once you get on a show and demonstrate that you can be be interesting, concise, and entertaining, you have a much better chance of being invited back. You have become a low-risk guest and will most always get the call over someone with whom the producer has no experience. It’s simply too risky.

Some of best examples I can give you are the famous scientists that we always see on TV.  Dr. Michio Kaku and Neil deGrasse Tyson are masters at taking something that is highly complex and making it fun and easy for the rest of us. That’s why they are called upon over and over again on space and science subjects.

Dr. Oz did the same on the Oprah show. He made enemas entertaining.

Rather than give technical answers to technical questions, they make them easy to understand with answers that start with, “It’s like a….” Or, “It’s as if…” Or, “You know how you do this, this is like that times 50-million…” They make comparisons that we can all understand.

COBRA-Defense Founder Chris Sutton has a catalog of sound bites that he created to explain his self-defense program. For instance, “When you need self-defense, nothing else will do.”

Where can you take a common but complex issue and make it as clear as a cane splitting a watermelon? In other words, how can you make enemas entertaining?